There was a small earthquake in Bagni di Lucca earlier this year. Fortunately nobody was hurt, but there was some structural damage to some of the ancient buildings in the area. 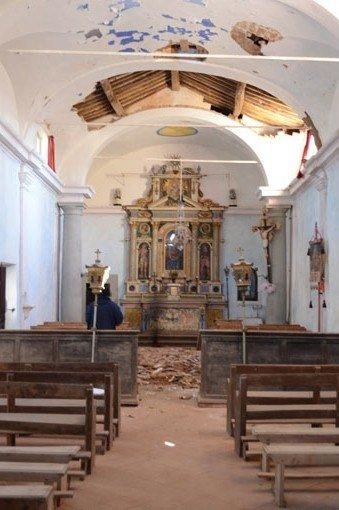 The chapel was completed in 1537. In that year the pre-existing chapel was restored and enlarged to its current size and shape. Inside the chapel are notable works of art, including a statue of the Virgin with Child attributed to Della Robbia.

Claudio Gemignani of Gombereto is heading up an effort to raise funds in Italy to help save the church. Ann Barsi is looking after efforts in the USA where $5,000 has already been raised.

Ann Barsi’s book, “Pieve di Controne – 2012” will be sold at the Gombereto Medieval Festival on 31st August and all the proceeds will be donated to the restoration.

I hope you can all make it to the festival and buy a book to help the church.

email Sig. Barsi at obarsi@verizon.net for more information on the fundraising efforts.